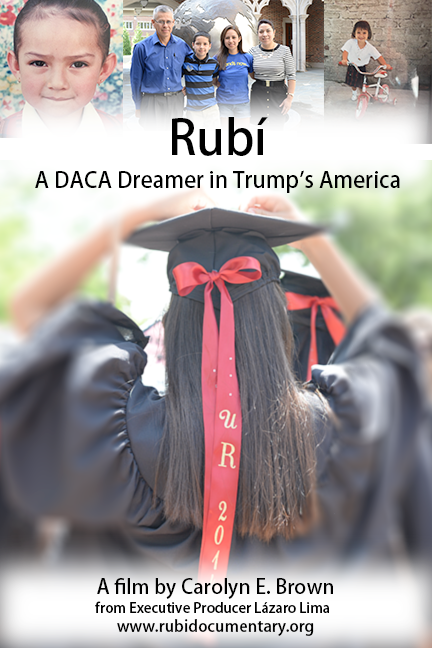 Rubí: A DACA Dreamer in Trump’s America is a 30-minute documentary that tells the story of how the current immigration crisis in the United States has imperiled the lives and aspirations of more than 800,000 young adults now registered under DACA. The film documents the nation’s most recent resurgence of anti-immigration bigotry and violence through the experiences of a young woman, Rubi, who must navigate the costs associated with failed immigration policies and the dehumanization of bodies reduced to exchangeable commodities under neoliberal economic flows.

Rubi is an intimate true-life portrait of 22-year old Rubi, an undocumented Mexican-American DACA DREAMer. In revealing interviews filmed over three years, Rubi and her parents (also undocumented) recount their family’s harrowing immigration story and detail why they came to the United States with their then-7 year old daughter.

Their family’s story resonates because it is the story of the American dream gone awry for scores of undocumented young people who only know America as their home; an America that will not have them if DACA is rescinded. Rubi’s Story is told through interviews intercut with footage of Rubi’s graduation from college and beginning her first professional job as a DACA DREAMer. These achievements are the very opportunities Rubi’s parents dreamed of when they left their families behind to start a new life in this country.

This film ultimately counters the current anti-immigrant rhetoric against the undocumented and offers the very humanity so many immigrants are denied in an age of unprecedented ethnic, racial, and anti-Latino hatred. Rubi’s story ultimately narrates a quintessentially American story: how a new generation is making the country live up to its promise in the face of insurmountable odds.

Rubi: A DACA Dreamer in Trump’s America from Carolyn Brown on Vimeo